A Tragic Day on Genesee Street


As I probably mentioned on this blog before, I’m a native of Buffalo, New York.  I still live there and I find the history of the city fascinating.  I love finding old photos of Buffalo, and I’m always pleasantly surprised when I find an old picture of Buffalo in a mainstream publication.  While looking through a book on photographic history not long ago I came across this photograph taken by I. Russell Sorgi.  Taken on May 7, 1942 and called Suicide (also referred to as Genesee Hotel Suicide or The Despondant Divorcee), it is a disturbing photo that captures an event that no one would voluntarily choose to witness: 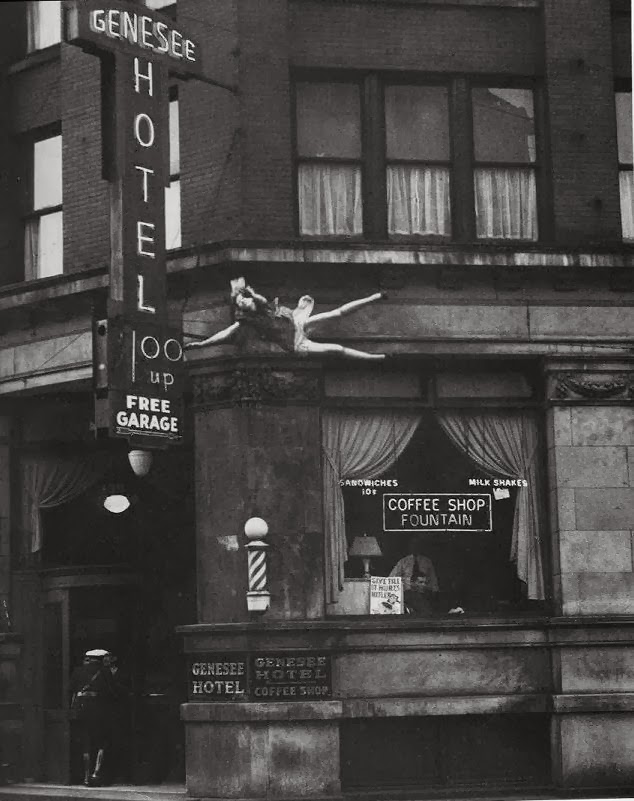 A little background information might be useful before I go on.  The photo was taken in front of the Genesee Hotel that stood on the corner of Genesee and Pearl Streets in downtown Buffalo (more on the building a little later on).  It shows a woman named Mary Miller falling to her death after jumping from an eighth story window.  Captured just a fraction of a second before Miller’s violent end, the photo made headlines and became well-known nationally after it was reprinted in Life magazine a few weeks after the incident.  The photographer was I(gnatius) Russell Sorgi, a staff photographer for Buffalo’s Courier Express newspaper.  Sorgi happened to be close by when the events at the Genesee Hotel were unfolding, and he explained the origins of the photo afterwards:

“I snatched my camera from the car and took two quick shots as she seemed to hesitate…As quickly as possible I shoved the exposed film into the case and reached for a fresh holder.  I no sooner had pulled the slide out and got set for another shot than she waved to the crowd below and pushed herself into space.  Screams and shouts burst from the horrified onlookers as her body plummeted toward the street.  I took a firm grip on myself, waited until the woman passed the second or third story, and then shot.”

Reading the quote over 70 years after the fact, Sorgi’s account can seem a little callous.  His description of the event seems indifferent to the plight of Mary Miller, but his words really underscore the difference between photography then and now.  People in the 1940s owned cameras, but they were used for special occasions.  They would take their cameras on vacations or to birthday parties, but didn’t take them to work with them.  There were other witnesses to this particular event (a woman in uniform, believed by some to be a meter maid, is rushing into the building, and the waiter in the coffee shop seems aware of a commotion outside) but none of them would have had cameras with them.  Sorgi was perhaps the only person in the immediate area with a camera at the ready, and he realized that the picture he took was different than other crime photos of the day.  Since photography was a more complicated process back then (through Sorgi’s description you can tell that his camera was definitely not point-and-shoot) and most photos of crimes or tragedies were taken after the event had already occurred.  This photo is a great example: 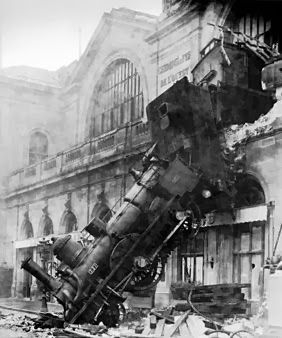 That photo, taken after a train accident at Montparnasse Station in Parisin 1895, really illustrates how documentary photos worked back then.  Photo could be a time-consuming process and cameras were bulky, so they were often brought in to document the aftermath of an event.  In the above photo, the event had already happened.  This makes it no less disturbing, for sure, but by the time the photo was taken the train was essentially debris waiting to be cleaned up.  Sorgi captured Murray’s tragic suicide while it was happening.  Catching something like this (however gruesome) was extremely rare and Sorgi was literally in the right place at the right time. He knew capturing this moment in this way was a once-in-a-lifetime opportunity.   We tend to take photography for granted and treat it as something that everyone has access to.  A recent tragedy that really illustrates the difference between then and now is the Boston Marathon bombing.  Literally hundreds of people were recording the finish line before and after the attack, creating an almost continuous record of the bombing and its aftermath.  Sorgi’s words may seem seem a little harsh, but perhaps we can forgive him a little for realizing that he was both witness to, and sole recorder of, a tragic event.

After discovering the photo, I was interested in finding out where it had taken place.  The sign for the Genesee Hotel is clearly visible in the photo, and Genesee Street is a major street in downtown Buffalo (although it’s been altered quite a bit since the photo was taken).  There’s a major hotel there today (the Hyatt) and I assumed that this is where the event had taken place.  But after studying the architecture of the Hyatt (originally called the Genesee Building) I know that wasn’t the place.  The first floors of the Hyatt are glass and bronze, not the brick and concrete visible in the Sorgi photo.  After doing a little digging I found this postcard reproduced on the Buffalo Police Department website:

That image shows a building attached to the Buffalo YMCA building (on the left) that matches the lower floors of the building visible in the Sorgi photo.  There’s a ledge at the eighth floor (Miller was described as jumping from an eighth story ledge) and a different photo taken after Sorgi’s clearly shows the YMCA in the background. 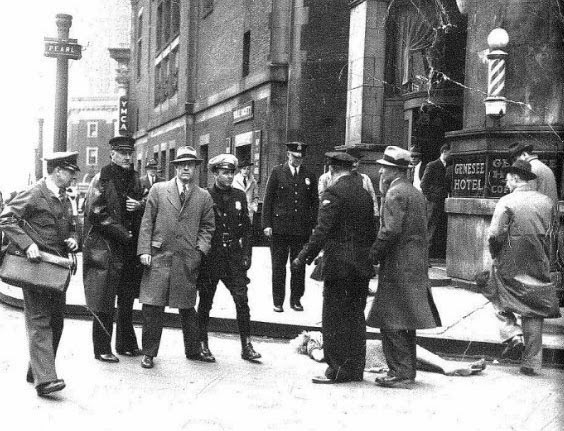 I was able to find another old photo that shows where the building stood in relation to the surrounding buildings, some of which are still there.

The building doesn’t exist anymore.  The most recent photo I was able to find of the old Genesee Hotel (that was later used as the YMCA Men’s Hotel) was from 1978.  It looks as if the building is in the early stages of demolition here:

I visited the site recently and it’s changed quite a bit.  The YMCA is still there, but the grand entrance that once faced Genesee Street is now found crammed into an alley.  Genesee Street was removed during the construction of the much-maligned Buffalo Convention Center, and the north entrances to the convention center now sit where Genesee Street once did.  The spot where the Genesee Hotel stood it now occupied by a modern office building and courtyard, and it’s hard to get a sense of where exactly the tragedy took place.  The sidewalk has been widened, and the removal of Genesee Street (which ran diagonally across Pearl Street) makes it hard to get a sense of how the building sat in relation to the street.

We tend to take photos of every moment of our lives now.  New technology is being developed that will actually take photos of our surroundings constantly, so we never have to miss anything.  The problem with that is that most of our lives are pretty ordinary.  It’s the rare and special moments in our lives that we want to remember, and that’s what photo used to be saved for.  You brought out the camera to commemorate those special times.  Sorgi’s photo functions in that way too, but on a much darker scale.  Tragic moments in life occur as well, and sometimes these moments are over in an instant.  When captured at just the right time, they can serve as horrifying reminders of tragedy and loss.

Next time, a new (and hopefully happier) topic.  It might be something you've never heard of.
Posted by Unknown at 12:09 PM 6 comments: