Memory is an odd thing.  An image of something glanced in passing can stick in our heads like a song we keep humming to ourselves.  What follows is an exploration (perhaps a somewhat obsessive one) of one such memory.

In May of 2009 I travelled to Montreal as part of my honeymoon.  While exploring the city with my new wife I happened across this building: 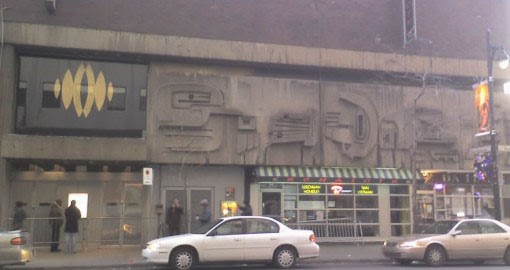 I noticed it our first night in town while we were looking for a bite to eat.  We had just arrived in Montreal and wanted to find some food after the long drive from Buffalo.  We eventually settled on a grocery store on Rue Sainte-Catherine directly across the street from the building pictured above.  It stood out to me because it seemed so out of place among its otherwise nondescript neighbors.  This stretch of street is relatively ordinary as big city streets go, filled with commercial storefronts that are more utilitarian than pretty or interesting.  This little building, though, was different.  A monumental mural decorates the second floor, wrapping around the corner to face Rue Sainte Christophe.   Almost alien considering the surroundings, the strange abstract symbols cast in concrete caught the attention of the artist in me. What was this place?  Who had designed the building and the mural?  What does the mural symbolize, if anything?  Are the figures meant to be human or animal, or something else altogether? 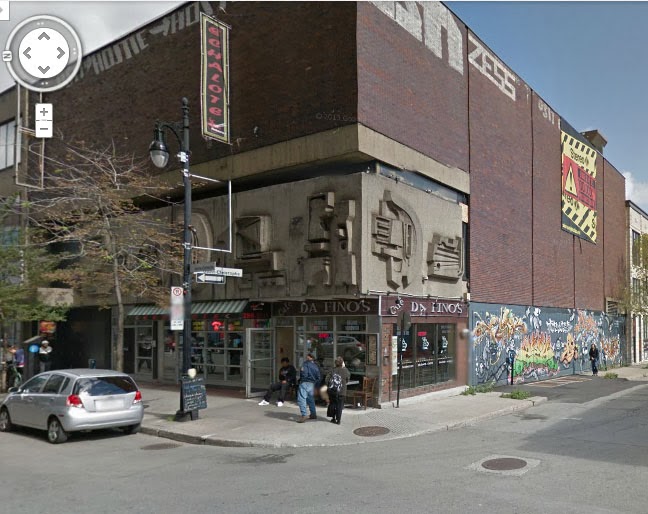 During my stay in Montreal, I would see the building many more times.  We stayed in a bed and breakfast near Rue Sainte-Catherine, and every morning while walking to the nearest metro station, we passed by this strange little structure.  When we returned to our hotel in the evening I would see it again, its enigmatic figures greeting me as I exited the Berri-UQAM metro station.  After leaving Montreal, my curiosity about the building didn’t fade away.  When I started this blog last year, I thought it would be the perfect opportunity to explore it a little further and perhaps answer some of the questions I had.

The first thing I had to do was find it again.  I mention street names and more exacting locations above, but to be honest I only had a rough idea of where the building was when I started this research late last year.  I knew the building was near the Berri-UQAM metro stop, so I started there (we used this station a lot while we were in town, so I remembered the name).  Often on this blog I talk about how researching topics in print form can be better than searching on-line, but this was one time that the Google Maps satellite view really came in handy.  It only took a few moments of scanning the immediate area around the metro stop before I found it, the strange mural visible even from the air.  When switching to street view, I was able to once again revisit (albeit virtually) the building I remembered so well from a few years before.

After finding it again, I could start to be a little more exacting in my research.  I found its address (858 Rue Sainte-Catherine est) and could scrutinize the exterior a little more closely.  What was the building’s purpose?  There are two identifiable storefronts on the first floor facing the street (both occupied by restaurants) but from the Google Maps street view what appeared to be the main entrance into the building is closed up (a larger establishment does currently occupy the building but was closed for an extended period of time- keep reading).   There are few windows in the structure.  A large window faces the street, and there is a thin ribbon window that runs along the top of the decorated frieze, but that’s about it.  There’s an exit at the back of the building facing Rue Sainte Christophe, but that whole side of the building is windowless.  The lack of fenestration led me to my first idea about the building: it is (or was) a theater.


Figuring out when the building might have been built (perhaps a clue to the designer) was pretty much a no brainer.  No. 858 wears its mid-century brutalism on its sleeve like a badge of honor.  The mostly unadorned block shape, the brown brick, and the rough aggregate concrete decoration all indicate that the building was built in the 1950s or 60s.  Brutalism isn’t universally loved by the public (or art historians, for that matter) and brutalist buildings can be awkward or downright ugly (it’s called brutal for a reason).  The architect who designed this building tried to temper the harsh unadorned walls by adding the decorated frieze.  Since the rest of the building is so austere, the frieze becomes the main focal point, drawing the viewer’s eyes across the entire façade.  I initially thought that this unique feature would be my point of entry into the history of the structure.  This massive decoration (at least 8 feet tall and 20 or more feet long) had to be designed by someone, right? Surely there would be record of the artist somewhere.

Initially I did have some success researching the recent history of the building.  Since the late 90s, it has been the home of Stereo Nightclub.  Stereo is globally respected as possessing one of the best sound systems in the world.  Naturally, all of the press on Stereo that I found on-line discusses the above-mentioned sound system as well as acts who have performed at the club, not the architecture of the building, so this knowledge only got me so far.  I also discovered something a little sadder- no. 858 was the victim of a pretty severe fire a few years ago.  The fire occurred in 2008 and was ruled an arson.  From rumors I read on-line, a rival club in Montreal hired a biker gang to torch the place.  Apparently the club scene in Montreal is more cutthroat than I imagined!   Stereo was closed because of the fire when I was originally visiting the city but has since re-built and re-opened (the entire interior was re-done, but the outside remains unchanged).  Here’s a short YouTube video of the fire. The sculpted mural is visible to the right.


Searching for information on Stereo Nightclub only yielded music and fire related items, so I had to try to research the building in different ways.  Googling the address (858 Rue Sainte Catherine) mostly brings up information on Stereo, so another tactic would be necessary.  But without the name of an architect or designer to search for I knew it wasn’t going to be easy.  I suspected that the building used to be a theater (perhaps a movie theater) but again I had no specifics and was only going on hunches.  Thus began a series of blind Google searches that have (as of this date) yielded little information and have turned up some enigmatic dead ends.
To begin searching, I Googled some basic terms I thought might work:

And so forth.  You get the idea.  Thus began my journey down the Google rabbit hole.  Searching for notable buildings in Montreal on Google is tricky because so much of the information you get is on Buckminster Fuller’s Expo 67 pavilion or Moshe Safdie’s Habitat 67 (notable structures, for sure, but not useful to me here).  I searched through pages of Montreal history and looked at countess flickr portfolios of the city.  I looked for Canadian architects who were active in the 50s and 60s (I was, and still am, working under the assumption that the architect is Canadian).  This led to names that I researched using multiple search engines, which in turn often led to other names and artists.  Nothing.  Montreal’s subway was built up mostly in the 60s and 70s, and is heavily adorned with public art, so I researched every metro station in the system looking for art that had affinities to the mural on no. 858.  Again, nothing.  The desk in my office is currently littered with pieces of paper listing the names of architects and architectural firms that were once a possibility.  Each one is now a dead end.

While searching, I discovered that Google has an option that lets you search visually, and thought this could be helpful.  You can upload an image to the site, then ask it to search for similar images.  Maybe it was worth a shot.  I entered the Google Maps street view and took a screen capture of part of the mural (the small part facing Rue Sainte Christophe- the mural facing the main street is partly obscured by trees).   I used Photoshop to remove the distortion and ended up with this: 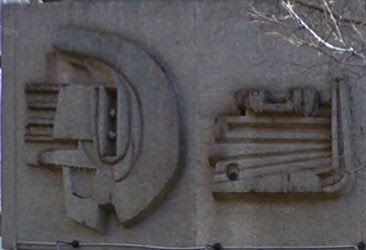 I uploaded the image to Google image search and crossed my fingers- maybe I was finally about to get some answers.  I ended up with this: 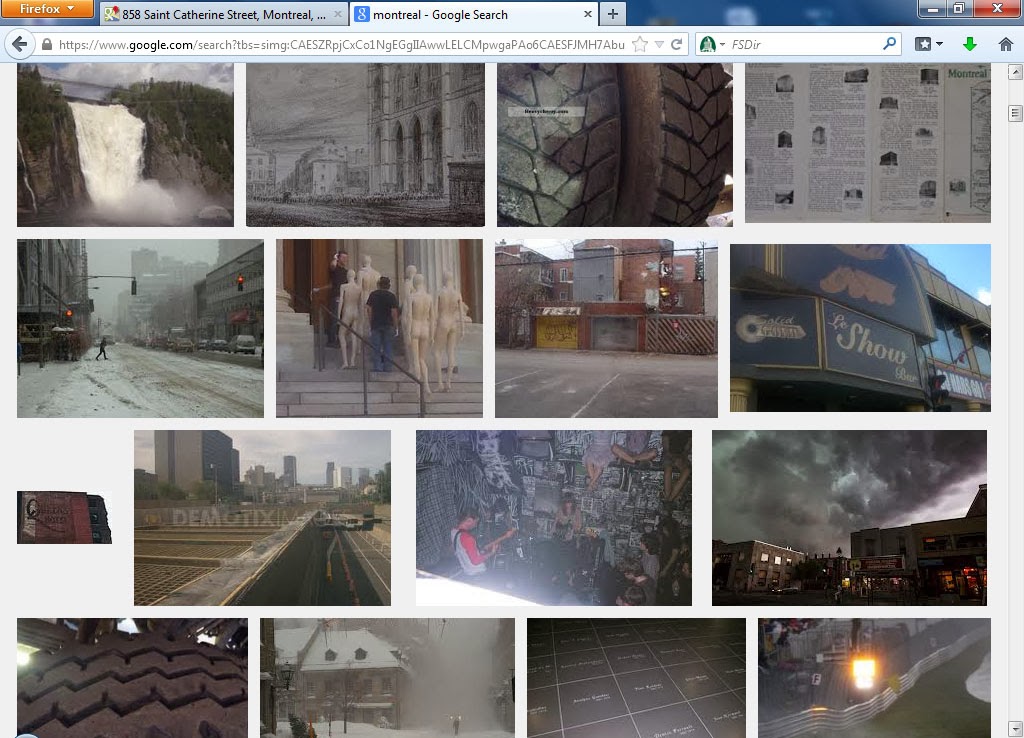 It’s good to know that the mural apparently has visual affinity to naked mannequins (probably not what the artist intended) and it seems that Google can at least identify it as part of a building, but it was yet another dead end.

I was just about to give up hope when I finally stumbled across actual, seemingly accurate information about the building on a website called Cinema Treasures.  It was a movie theater!  I was right!  Now let’s find out who designed this thing- oh wait, it doesn’t say here.  But it does give a short history of the building, which I present here:

After finding this, I was finally able to refer to the building by its proper name: The Fleur de Lys Theater.  This definitely gave me some satisfaction, but not enough.  The site lists the building as being constructed in 1967 but that date isn’t verified, nor is it listed where that information came from.  The name Michel Custom belongs to a promoter or manager, I think, not an architect.  Since this is a website dedicated to old movie houses, I tend to trust the information, but I still had a lot of questions that couldn’t be answered here.  But I did have a name, and that was a huge step forward in my journey.  Now I could search the web more exactly, and look in books on architectural history and perhaps find some info.

At this point, all I can say with certainty is that this building is Montreal’s Fleur de Lys Theater. It was probably built in 1967.  Armed with this information I could focus my on-line searches and start looking for print evidence. Surely I would be able to finally discover the name of the architect who designed this strange little building, as well as what the mural is meant to symbolize (my current theory is that it’s landing coordinates for the alien motherships, in which case we’re all doomed).

Next week, the story of my slightly more directed (but no less confounding) search continues.
Posted by Unknown at 12:07 PM 5 comments: