In my last post, I wrote about the Vietnam Veteran’s Memorial, specifically its design by Maya Lin.  She was the winner of a competition held to find an appropriate monument meant to remember a difficult time in American history.  What interested me in starting this topic were the other proposals that were submitted for review.  Many different artists and designers had ideas for the monument, and almost 1,500 plans were received.  I thought it might be interesting to track down some of these alternate monument designs.  How different would Washington D.C, and monument design in general, be if a different design had been chosen?

The task proved harder than I first thought it would be.  Surely an old book or magazine article would illustrate some of these other designs.  Apparently that wasn’t the case.  After looking through many books and magazine articles, I was able to find only one.  It appeared in a 1980 edition of Time magazine.  It looked like this: 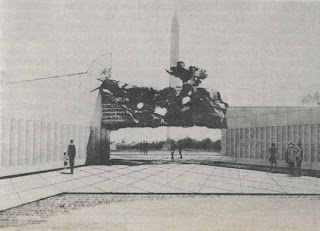 The names of the soldiers who lost their lives are listed on two separate wall sections, and what appears to be a sculptural group of some kind is elevated between the walls, creating an arch.  No designer’s name was given in the article (I would give credit to the designer if I could).  According to the article, it was the second place finisher in the competition.  It seems competent enough, and could have been a fitting tribute, but Lin’s design was the overwhelming winner.

The time article doesn’t print any other pictures, but does offer a written description of some of the other designs, stating:

“The rejected entries include such kitsch as a house-high steel helmet and a number of handsomely styled columns, pylons, tables and structures that belong at a World’s Fair or amusement park.  Other designers accommodate the thousands of names on various layouts of slabs, blocks and other geometric stones and look depressingly like constructivist graveyards.”

That paragraph states something that I hadn’t realized before starting this research.  Mainly, it wasn’t Maya Lin’s idea to list the names of all of the fallen soldiers (I always thought it was).  That aspect of the memorial was decided on by the selection committee, and all of the designs had to incorporate it.  The above design seems to have the names listed in columns on white slab walls.

Ultimately, I don’t wish to suggest in this post that something else should have been built in D.C to commemorate the Vietnam War.  Lin’s design won the competition by a landslide and continues to move people to this day.  Even though the idea of listing the names of the fallen was conceived by someone else, her design incorporates this element in a unique and memorable way.  The walls are black granite (not the typical Washington marble) and are reflective.  Therefore, when a visitor looks at the monument they see themselves.  Our history is tied to people from the past.  Our present lives are impacted by the sacrifice of others.  Something as simple as a reflective surface takes on incredibly deep, symbolic meaning in the design.

Also, Lin chose to list the names in order of their death (not alphabetically), so if one wishes to find a specific name, they will most likely have to scan a section of the wall, reading many names before they find the one they’re looking for.  Finding a name on the wall takes a little effort, and in doing so Lin causes us to confront the enormity of the loss sustained in Vietnam.  It is not a passive memorial, and it demands our participation.  Many deigns were submitted, but clearly the best woman won.  Perhaps it’s fitting that the other designs have faded into obscurity and become Cultural Ghosts.

For more information on the design and construction of the memorial, watch the excellent documentary “Maya Lin: A Strong Clear Vision.”  It not only documents the initial controversy surrounding Lin’s selection for the Vietnam Memorial commission, but also highlights some of her other public commissions, such as the Civil Rights Memorial in Montgomery, Alabama, and the Yale Women’s Table in New Haven, Connecticut.


Next week, some alternate designs for a different memorial.  They might be things you've never heard of.

Anonymity in the service of greatness

Washington D.C is a city full of monuments and memorials.  The historic sites in D.C. commemorate everything from presidents to wars.  They are sacred places that attract both contemplation and protest.  Every monument and governmental building in the capitol was designed by an architect, of course, but in most cases the name of the individual is not as important as what is being celebrated. 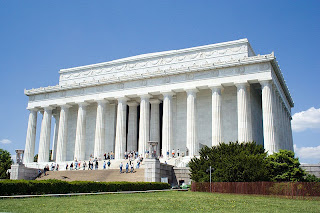 For example, the Lincoln Memorial is a building dedicated to the ideals of a great president.  When one visits it, the point is to remember the man and his actions, not the builder.  And, like most monuments in D.C. (especially the older ones) the building itself is purposely a little nondescript.  It’s a Greek revival design, not incredibly different from the Jefferson Memorial or the Capitol Building.  It’s adorned with the same columns and white marble that can be found on countless Washington D.C buildings.  As an artist and art historian, I cannot name the architect of the Lincoln Memorial off the top of my head.  I could look it up easily enough if I chose to, but that’s not really my point with this post.  The monuments of D.C. were meant to be timeless in a way, built using artistic principles that were taken from past great civilizations and seen as never going out of style.  The greatness of the people and events they remember was meant to live on long past a single architect or sculptor.  Since D.C. is a very carefully planned city, it almost seems as if the monuments to our Founding Fathers have always been there, or could have all been designed by the same person at the same time.

Of course, that’s not the case at all.  New memorials are still planned and built, although space on the National Mall is at a premium these days.  The past few decades have seen a number of significant new memorials built in D.C., perhaps none more well-known than the Vietnam Veterans Memorial.

A Name Stands Out 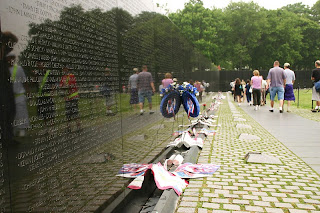 The Vietnam Veterans Memorial (also referred to as The Wall) is one of those newer monuments.  It was dedicated only about thirty years ago (a blink of an eye in an old city like Washington) but has since become so iconic that it’s kind of hard to picture D.C. without it.  What concerns me in this post is who designed it.  Unlike other Washington memorials that stand as somewhat anonymous in terms of their designer, the Vietnam Veterans Memorial is intrinsically tied to the name of its architect: Maya Lin.  Lin is almost universally recognized as the site’s architect, and I would go so far as to say that many people who visit the memorial today can probably name her.  Even if they can’t remember her full name, I would bet that most people can think of some aspect of the design, such as it being designed by a woman, or that it was controversial when it was first built.

There are probably many reasons why Lin is so identified with the Memorial.  Television is probably the main force behind her notoriety.  Planning for the Memorial began in the late 1970s, an era where people were used to getting their news in a visual format.  The story of the monument planning and design selection made nationwide headlines, and Lin’s image got splashed across the county’s TV screens.  She was also very young (only 20 at the time of her selection), something that made her choice seem even more remarkable.  Surely there’s no other D.C. memorial designed by someone so young.

But, what concerns me here isn’t what was designed by Maya Lin and built 30 years ago.  The Vietnam Veterans Memorial surely doesn’t qualify as a cultural ghost.  It’s one of the most recognizable monuments ever built and is one of Washington’s most visited and revered sites.  What I wish to highlight here is how Lin was selected in the first place.  The design commission for the Vietnam Memorial was a competition, and over 1,000 entries were submitted for consideration (1,421 to be exact).

What did some of the other proposals look like?  How would we perceive the monument if it had been designed by someone other than Lin?  Would the Memorial have the same power if it looked different?  Those were some of the questions I asked myself as I began researching this post.  Almost 1,500 entries is a lot, and I wondered who had submitted them.  Famous architects?  Vietnam Veterans?  Other students like Lin (she was a student at Yale at the time)?  Trying to find the answers to some of those questions has proved more difficult than I first imagined.  Google “Vietnam Veterans Memorial” and all you are going to get are photos of the monument as built.  You’ll also get a fair share of photos of Maya Lin.  Books on the subject don’t offer anything different.  I’ve discovered one thing for certain; the monument as built is heavily documented by professional and amateur photographers, but the other monument proposals have seemingly disappeared from history.

Ultimately, perhaps that’s a fitting ending to the story of the monument.  Controversial at first, the monument has since gone on to become one of the most moving memorials in America.  It tackles a complicated subject in an extremely sophisticated and elegant way.  The design concept of listing the names of all who lost their lives has become almost ubiquitous in monuments that remember war or catastrophe (the 9/11 Memorial in New York is probably the most recent example).  It’s hard to imagine The Wall any other way.

My research into these alternate monument proposals continues, and I think that I’m getting close to finding some reproductions in old magazines.  I don’t often end these posts on uncertainty.  I plan a series of posts ahead of time, and usually know what each one will contain.  I can’t promise that this week, and the elusive nature of these old proposals only proves that there’s so much of our past that’s hiding in old archives and books.  Cultural Ghosts are never easy to track down.

Next time, I hope to be able to post images of some of these alternate proposals.
Posted by Unknown at 10:30 AM No comments: