Revisiting Knives Don't Have Your Back by Emily Haines

Solo albums or side projects by established musicians can be a mixed bag.  Sometimes they can bring a new level of notoriety to an artist, but they can also massively overestimate the public’s interest in any music a well-loved band member has to offer.  For every Peter Gabriel or Sting solo record, there are at least 4 members of KISS willing to put out stuff like this.  Done well, though, a good side project or solo album can give the listener a new appreciation for an artist they thought they already knew. This article focuses on one such album, namely Knives Don’t Have Your Back (2006) by Emily Haines.  Since Haines just released her new solo record (the excellent Choir of the Mind) I figured now was as good a time as any to explore how Knives fits in with the rest of her extensive discography.

Haines is mostly known as the vocalist and keyboard player for Canadian indie rock band Metric.  By 2006, Metric had released two albums and had been working for years at establishing a dedicated (and growing) fan base, first in New York City and Los Angeles, and then in Haines’ hometown of Toronto.  Their songs on these two albums (2003’s Old World Underground, Where are You Now?, and 2005’s Live It Out) deal with topics one might expect a young rock band to cover.  Songs such as “Handshakes” and “Patriarch on a Vespa” question the power structures of society and how we get trapped by them or rebel against them. There’s a smattering of anti-war songs (“Succexy”, parts of “I.O.U.”).  When dealing with relationships (a common topic for any musician to cover), a fairly cynical approach is often expressed.  Songs like “Too Little, Too Late”, “Live It Out”, and “Wet Blanket” describe affairs gone sour or about to end.  Happy songs are occasionally thrown in to the mix, such as “Love is a Place”, the short and sweet song that closes out Old World Underground…, But the positive and cynical are mixed, with a cynical or skeptical view of relationships often winning out.  This overall tone would start to change with the release of the album Fantasies in 2009, and I think Knives Don’t Have Your Back played a role in that artistic evolution. 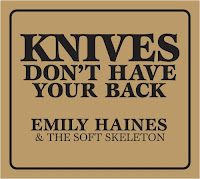 Haines’ distinctive voice, as well as the prominent and creative use of synthesizers (also provided mostly by her) are what truly set Metric apart.  At an early stage in their career, she had already established herself as a charismatic band leader and prolific songwriter.  To Metric fans, it perhaps seemed inevitable that she would eventually record solo material, and she was certainly no stranger to side projects (both Haines and Metric guitarist Jimmy Shaw collaborate regularly with Broken Social Scene).  But what makes Knives Don’t Have Your Back unique is where and how it fits within Metric’s overall discography. We might tend to see solo projects as diversions from an artist’s usual gig.  Maybe a side project is an attempt to branch out and try something different or indulge in a new musical style. My point is that solo projects sometimes seem to be appreciated separately from an artist’s main act.  Mick Jagger’s solo albums are a good example- does anyone really consider them to be an essential part of the Rolling Stones’ output?

I would argue that Knives was not a diversion for Haines, but a vital piece of the puzzle in understanding how Metric evolved as a band. The first curious thing about Knives is it’s timing.  Metric would eventually achieve greater success and notoriety (especially after the release of Fantasies), but 2006 might have seemed like a strange time for the lead singer of an up-and-coming band to release solo material. Metric had only released two albums at the time and were not widely known outside of Canada.  Therefore Knives cannot be seen as a cash-grab or a quickie release recorded only to capitalize off of a successful album.  This makes Knives feel more personal and urgent, like she had to get these songs out, regardless of whether or not anyone else wanted to hear them.  One could argue that she had nothing to lose in releasing it, but potentially nothing to gain either.  An album filled with sad songs might have seemed like a gamble after recording the defiant and angsty Live It Out.  Fans might have rejected it. The album did sell moderately well in Canada upon it’s initial release, but remains obscure pretty much everywhere else. I was a Metric fan for a while before I was aware of Knives Don’t Have Your Back, and I’ve met fans who have never heard it. It’s unfortunate that the album isn’t more well known, since it’s an impressive collection of songs that explore complex emotions and themes like depression and loss. I also believe the album is important because it marks a turning point in Metric’s overall songwriting and tone, signaling a shift from darker or more cynical topics to more positive and (dare I say) happy imagery.

(I should say before I go further that Knives Don’t Have Your Back is technically a side project (as opposed to a solo album).  Released under the name “Emily Haines & The Soft Skeleton”, she recorded it with Metric guitarist Jimmy Shaw, Scott Minor, Justin Peroff, and Even Cranley.  But, she wrote all of the songs and several of the concerts she played to support the album were solo affairs (just her and a piano), so I consider it a solo album and refer to it as such throughout this post.)

The narrative that often surrounds Knives is that Haines wrote it after the sudden death of her father, poet Paul Haines, in 2003.  That unfortunate event might have been the catalyst for recording the album, but some of the songs had been written before that, and only a couple of the tracks (namely “Winning”) seem to deal specifically with death. (The album cover, though, is a direct reference to Escalator Over the Hill, the album Paul Haines recorded with jazz pianist Carla Bley in 1971).  Instead, the album deals with the sadness and depression that can follow loss.  The loss of friendships and relationships is tackled in a stark, often harrowing manner throughout the album’s 11 tracks.  Make no mistakes going in- Knives Don’t Have Your Back is an intensely sad album.  From the opening track, the somber “Our Hell”, Haines lays out her thesis that she develops and revisits throughout the album:  Being happy is all well and good, but when something happens that upends that happy life, you’re just left longing for it.  “Our hell is a good life,” she sings, not because the good life is hellish, but because the good life might only be temporary.  The songs are filled with reflections on disappointments and dashed expectations.  Recorded when Haines was in her early 30s, the downbeat tone of the lyrics may be a result of growing older and experiencing both the good and bad in life.  The brashness and confidence of youth eventually collide with reality.  “What I thought it was it isn’t now” she sings later in “Our Hell.”  Ruminations such as this make Knives Don’t Have Your Back the soundtrack to things coming undone.

“Our Hell” is followed by “Doctor Blind”, the closest thing Knives had to a hit.  “Doctor Blind” was originally a Metric song, and Haines and Shaw recorded a demo version early in their career that never made it on to a Metric album (hear it here).  The interesting thing about it’s inclusion on Knives is how Haines recycles and repurposes the older song to make it fit the themes of the rest of the album.  Originally a more upbeat condemnation of consumerism, Haines re-worked the lyrics and instrumentation to create a stunningly accurate portrayal of depression, and from the first notes “Doctor Blind” feels uneasy.  It uses a slowed down, wonky time signature that makes the opening piano chords feel disjointed (seriously, try to tap your foot to the melody- it’s not easy).  The first verse reinforces Haines’ view of an upended world (“Toothless dentists/ Cops that kill”) but it’s the chorus that hits home. “My baby’s got the lonesome lows/ Don’t quite go away overnight/ Doctor Blind, just prescribe the blue ones/ If the dizzying highs don’t subside overnight/ Doctor Blind, just prescribe the red ones.”  The lonesome lows that don’t quite go away overnight.  Has there ever been a more accurate and succinct description of depression?  As someone who’s suffered through depression in the past, I think “Doctor Blind” captures the feeling perfectly.  It’s a touching depiction of depression as well as a condemnation of doctors who are unable to treat it or indifferent towards it.  That medicine didn’t work?  Just take this one.  We might be over-medicated but we’re not better.  “Doctor Blind” is easily the standout track on Knives, and I think it’s one of the best meditations on depression ever written, as well as one of the saddest songs I’ve ever heard.


“Crowd Surf Off a Cliff” comes next, and with this song Haines doubles down on the sadness.  If “Doctor Blind” is about being depressed, then “Crowd Surf” is about being really, really depressed.   Played only on the piano and sung with slightly distorted vocals, the song is stripped down and ethereal.  Some of the darkest imagery on the album is conjured here, and it makes for a devastatingly sad song. It starts with a lamentation for a lost lover: “Rather give the world away/ than wake up lonely/ Every day and every way/ I see you with me” she sings, but the song soon slips in to other regrets as well.  It’s hard to see some lines as anything other than a reappraisal of her choice to pursue a music career.  “Are we breathing?/ Are we breathing?/ Are we wasting our breath?/ It won’t be enough to be rich/ All the babies tucked away in their beds/ We’re out here screaming.”   To me, the whole song really gets to the heart of what it’s like to suffer from depression.  When you’re depressed, you aren’t just sad about one thing- you’re sad about everything.  You feel that every choice you’ve made in your life has been the wrong one, and that’s really what the whole song’s about.  I just wrote that “Doctor Blind” is one of the saddest songs ever written, but “Crowd Surf” beats it by a mile.