A few weeks ago I dug some old Smithsonian magazines out of my attic.  They had once belonged to my Grandfather, and they date from the late 70s and early 80s.  He had a subscription to the magazine, and when he was done reading an issue he’d give it to me and my brother.  My Grandfather died when I was very young and I never really knew him.  We saw him all the time growing up (he and my father ran a business together) but I was never able to know him through the eyes of an adult.  These old magazines are probably the only actual link I have to him now, and it offers a little bit of an insight into who he was.  Anyone who reads Smithsonian is going to be someone interested in a wide range of topics since it’s kind of an eclectic magazine.  Any given month, the topics covered can be as varied as history, science, archeology, and art.  It’s a very smart magazine and presents challenging articles about the government, environment, and culture.  I like to imagine my Grandpa reading it cover to cover, agreeing with some article, disagreeing with others, and always eagerly awaiting the next issue.  I can read these old magazines now and feel I’m really connecting with him in a way I was never able to.

What perhaps is one of the most interesting aspects of these old issues is how they document current events with a sense of newness and wonder.  Reading these stories now gives an insight into how people saw these events while they were happening.  They’re windows to the past that can be incredibly poignant.  Among the issues I hauled down from my attic is an article from a 1979 issue discussing global warming and climate change.  These words weren’t even close to being part of the public discussion back then, but Smithsonian wrote about it.  Another cover story documents the construction of the then-controversial Pompidou Center in Paris. This building is an indelible part of the Parisian landscape now, but back when it was built many questioned its design.  I also vividly remember the issue documenting the discovery of the Chinese terra cotta warriors in the mid 70s (this one particularly fascinated my brother).  Another fondly remembered article explored the discovery of the recently re-discovered “Wasp in a Wig” segment from Lewis Carroll’s Through the Looking Glass.  I don’t have all the magazines my Grandfather gave me anymore (I once had dozens, now I have about 10) but the ones that are left touch on topics that can certainly be considered Cultural Ghosts, and this brings us to the topic of this week’s post.

One of the topics that Smithsonian covers with regularity is art.  Almost every issue (both past and present) has at least one article dealing with art, and individual artist, or architecture.  While thumbing through the February 1979 issue I found an article about a strange sculpture garden on the outskirts of Paris created by a sculptor named Robert Tatin.  I have seen a lot of art and studied many architectural sites, but wouldn’t profess to know everything.  This was a place I had never heard of, and decided to research it a little more.

At the most general level, the Musée Robert Tatin could be considered outsider art. It’s really the only thing Tatin is remembered for, and he built the entire thing himself free of wider architectural styles or trends.  Basically, he did what he wanted to do, and didn’t care whether others liked it or not.  Outsider artists often work this way.  They may toil for decades on one project (California's Salvation Mountain or the Watts Towers in LA) or create their work in private, never intending to show it to anyone (Darger comes to mind here).    The  Musée Robert Tatin may be lumped in with other outsider art sites, but Tatin was anything but an outsider.  He hobnobbed with Jean Dubuffet and AndreBreton (the founder of Surrealism) as a young man and tried many careers before starting construction on what would become his museum and legacy.  After a chance meeting with French President Charles De Gaulle in 1965, he set up a meeting with Culture Minister André Malraux and was then relentless while he worked towards getting his site recognized as an official museum by the French government.  His endless self-promotion eventually paid off, and the site is still operating as an official Musée de France. 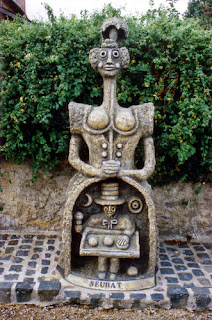 Tatin had a singular artistic vision, which is probably why he’s often grouped in with outsider artists.  Take this sculpture of the artist Georges Seurat, for example.  Many of the concrete sculptures Tatin made represented artists, but they didn’t use common symbolism or even look like the artist they represented.  Here the female figure is most likely meant to reference one of the main figures from  A Sunday Afternoon on the Island of La Grande Jatte (Seurat’s most famous work).  But why is there a smaller figure under her dress, seemingly playing a shell game?   Tatin had his reasons, I’m sure, even if they may not be clear to us now.  That’s what’s so great about art.  It can be depicted and interpreted in a myriad of ways.  Maybe we see what Tatin intended, maybe we don’t.  Maybe we make up our own meanings.  Our ability to make art personal, while we’re making it or looking at it, keeps it valid and relevant.

Some other views of Tatin’s museum can be seen below: 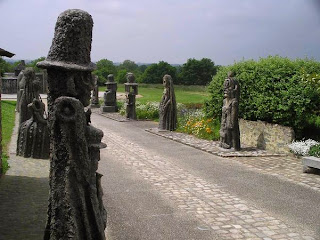 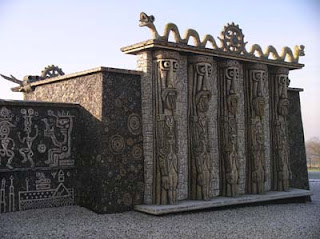 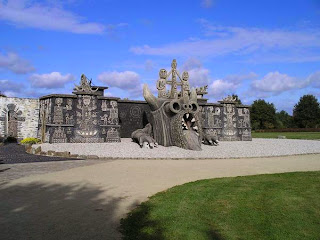 Unlike some other topics I’ve covered in the past, the Musée Robert Tatin is still in operation and can still be visited today.  I include it on this blog as a Cultural Ghost because it’s a place that exists only a short drive from a major world capitol, but is still largely unknown outside of France.  Robert Tatin doesn’t have an English-language Wikipedia page, nor does the museum itself.  The official website for the museum is in French only and can’t be viewed in other languages.  When I Googled the museum to begin my research for this post, about half of the articles that came up were in French.  There are cultural sites outside of Paris that are part of the tourist landscape in Europe and are visited by thousands of people a year.  Places like Versailles and Giverny come to mind, and are visited and talked about today because they played a part in global history and culture.  Tatin may have never made that much of an impact, but he did leave behind a record of his distinctive artistic vision.  Your individual legacy is what you make it, and perhaps nobody understood that more than Robert Tatin.

Next time, a new topic.  It might be something you've never heard of.
Posted by Unknown at 11:45 AM 1 comment:

What Wasn't Built: The FDR Memorial


In my last posts I looked for alternate designs submitted for the now legendary Vietnam Veterans Memorial.  My search proved harder than I originally thought it would be, and I was only able to find a photo of one submitted design.  For this post, I decided to take a slightly different route and chose something I knew I could find documentation of.  Marcel Breuer’s design for a proposed Franklin Roosevelt Memorial isn’t necessarily hard to find (images of it are available on-line) but I classify it as a Cultural Ghost because it’s the kind of thing that’s hard to find unless you’re specifically looking for it.

It was inevitable that a memorial to Franklin Delano Roosevelt would someday be built in Washington D.C.  FDR was elected president 4 times and lead America through two of the darkest chapters in history.  He enacted social reforms that are still with us today.  A memorial to his presidency (and basically two decades of American history) was proposed as early as 1960, but the memorial that stands today as a symbol of Roosevelt’s greatness wasn’t opened to the public until 1997.  Over the course of 30 years, there were bound to be some changes, and the finished memorial differed greatly from what was eventually built.

The monument was eventually handed to Lawrence Halprin.  As it stands, the FDR Memorial is a series of rooms, each one abstractly representative of Roosevelt’s time in office.  Events like World War II and The Great Depression are remembered with statuary and waterfalls.  Instead of one statue of a president, the FDR Memorial is considerably more complex.  Sculptor George Segal created several of his characteristic figures and vignettes, and other sculptors such as Leonard Baskin and Robert Graham also contributed to the sculptural program.  There’s the obligatory bronze statue of FDR himself, of course, but Eleanor Roosevelt and FDR’s beloved terrier Fala are also commemorated.  It’s a grand memorial for a larger-than-life figure, but it could have been much different if the original plan for the memorial had been built.

Architect Marcel Breuer seemed to perfectly fit the profile of the designer for an FDR Memorial.  He was of Jewish descent and had taught at the Bauhaus, the school that revolutionized the basic approach to teaching art and design.  He fled to England when the Nazis forced the closure of the school in 1933.  His life was rearranged by World War II, but he had overcome adversity and found success as a practitioner of modern architecture.  His design for the FDR Memorial, submitted in 1966, looked like this: 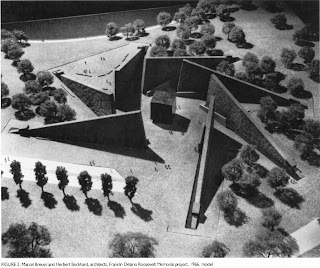 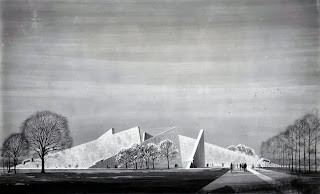 Breuer’s vision of architecture and design is certainly visible here.  A large block or cube is surrounded by several slanted slabs (they appear to be marble in one of the photos) that seem to be radiating out from the center.  The materials and surfaces speak for themselves.  There is no statuary or giant sculpture of the president.  Such a modern approach would surely have been controversial had it been built, and the design was criticized while still in the planning phases.  Delays in the planning and funding dragged the project out, and it was eventually handed off to a different designer.

Breuer’s design offers an insight into American aesthetics of the mid 20th century.  Modern design and architecture was working its way into the mainstream, and the sleek unadorned memorial reflects the changing attitudes towards design and planning that took hold after WWII. But, I don’t mean to suggest that Breuer’s design would have been better then what was actually built in D.C.  The monument as it stands is a moving tribute to a great man as well as a peaceful place to contemplate and reflect on some of the most difficult times in our history.

Next time, a new topic.  It might be something you've never heard of.
Posted by Unknown at 11:26 AM No comments: