Growing up in the 1970s, I watched a lot of Mister Roger’s Neighborhood.  Children’s T.V. programming was limited in those days.  Sesame Street was around, of course, and living close to Canada gave me access to classic CBC kid’s shows like Mr. Dressup and The Friendly Giant.  By writing about Mister Roger’s Neighborhood for this blog, I don’t mean to infer that the show is a “ghost”, it still airs intermittently on PBS and some episodes can be found on-line, but it isn’t as widely seen as it was in its heyday, and this is unfortunate, since it was a respectful and innovative show that treated children as people capable of intelligence and insight.  Fred Rogers never talked down to his viewers.  He discussed topics that were relevant to children of the 70s and 80s (like divorce), and in doing so created a relevant contemporary forum for contemporary family issues.  Fred Rogers was a Presbyterian minister, but his show was never preachy- he treated all children as his neighbors and spoke to them on their level.

The show featured many types of segments, from remote segments filmed outside of the studio to the stories that took place in the Neighborhood of Make Believe.  Just this past weekend, I was channel surfing on a Saturday morning and caught an episode of the show that dealt with art (both the making of and looking at) in Rogers’ characteristic easy going style.

In the age of instant re-watchablitly, I was expecting to be able to find the episode on YouTube and just post a link to it here so any reader could just watch it and see what I was talking about, but the episode isn’t available there so I find myself relying on my memory as much as I normally do when I write one of these posts (if anyone who reads this is able to find a version of it online, please send me the link).

The episode is from the show’s 11th season, episode 9, and first aired on June 2, 1981. In it, Rogers travels to the Carnegie Museum of Art to look at some paintings (Mister Rogers’ Neighborhood was filmed in Pittsburgh).  Walking through the museum’s halls with one of the curators, he stops and studies three paintings.  The first is Portrait of a Boy by John Singer Sargent, 1890.  Then, they move on to view Vincent van Gogh’s Wheat Field after the Rain (Plain of Auvers), also 1890.  Finally, they visit the large and colorful Queen Louise of Prussia painted by Joan Miro in 1966 (this painting is a little bit of a Cultural Ghost in itself- it’s hardly represented online at all).

What I found so remarkable about the show (and why I wanted to write about it here) was how long the two spend looking at the paintings.  Visitors to art museums often speed through works of art, spending only seconds looking at each one.  Rogers presents the work very differently.  The camera lingers over each of the paintings for a couple of minutes while he talks about what might be going on in the picture.  That he can talk about the painting in ways that make the work relevant to young viewers while still talking about it intelligently speaks to what a great educator he was.

When talking about the Sargent, for example, Rogers considers what children might think about the young boy depicted in the work.  After being told that the boy would have had to sit for potentially hours while Sargent painted him, Rogers notices that he looks a little bored (something a child who has to sit through a long day at school can definitely relate to).  When contemplating the colorful Miro, Rogers doesn’t ask the curator what it’s supposed to be a picture of, but instead immediately identifies parts of the painting that look like other things.  He says he sees a moose head in the upper right, and the curator says that children who visit the museum see a helicopter in the upper left.  Finding things we find important in a work of art (regardless of what the artist intended in many cases) is what keeps are alive, and Rogers totally nails this aspect of it, letting children at home know it’s O.K. to see these things in a work of art.  I think we often lose track of this innocent viewing and look at art through different eyes as we grow older.  We might look at a non-objective painting like the Miro and ask “What’s this supposed to be” instead of “what do I think I see?”

In fact, by using these three works, Rogers presents the three basic categories of art.  The Sargent is realistic, the van Gogh abstract (simplified and exaggerated) and the Miro is non-objective.  It’s an intelligent and well-thought out collection of work that asks the viewers to contemplate different ways of making a picture.
When Rogers returns “home” (the studio), he introduces that episode’s Neighborhood of Make Believe segment, that also happens to revolve around art making.  King Friday is having an art competition and all of the inhabitants are getting ready to participate.

The Land of Make Believe segments were probably the segments I looked forward to most as a child (what kid doesn’t love puppet shows?). As an adult, I can appreciate the lo-fi appeal of these segments.  The puppets have a charming hand-made appearance, and Rogers doesn’t really try to disguise his voice in his puppetry performances- any kid watching knew it was him doing many of the voices.  Even though he’s not visible, his presence is still felt in these segments, and this really creates the sense of make believe he so strongly advocated.  Outside the puppet arena, Rogers was the kindly guide and mentor, but in the land of Make Believe he was allowed to play.  The characters in the land of Make Believe really act as surrogates of emotions and feelings.  Shyness, confidence, sadness, and happiness are all embodied by the friendly human and animal inhabitants.  Then there’s Lady Elaine Fairchild.

Wikipedia describes Lady Elaine thusly: “Although a frequent antagonist, she is not portrayed as evil, but as someone who challenges authority”.  Nice try Wikipedia, but any kid that grew up in the 70s knows that Lady Elaine is a stone-cold schemer.  In this episode, she tries to Sherrie Levine her way into the competition by presenting a post card of the van Gogh Plain of Auvers as her own work.  Lady Aberlin sees through that crap in about two seconds, though, and chides Lady Elaine for trying to cheat.  This bit is important because it introduces the idea of originality and honesty.  If someone is going to compete in a competition, they must do the work themselves.

In conclusion, I wanted to write about this episode because it seems so different from how children’s programming is made today.  Not to say that contemporary programs are bad or deficient in some way, but just different.  Sometimes it’s good to see evidence of a time when a kindly television host took to time to introduce art to children and let them just look. This episode has so much to teach kids about art it’s really- wait, what? Big Bird’s in it too? Holy crap, this is like the greatest episode ever! 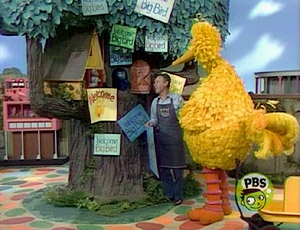 Now, if I could only prove that Casey from Mister Dressup was Lady Elaine’s long lost child… 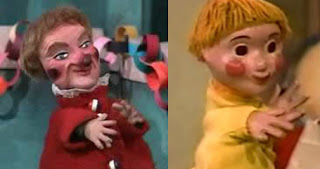 I grew up in the Buffalo suburb of West Seneca.  It was pretty ordinary, as suburbs go, but West Seneca was special in one regard: a famous artist once lived there.  My father told me this when I was a kid and it was kind of a magical thought, since Buffalo in the 70s and 80s was not always seen as particularly remarkable.  I knew even then that artists usually lived somewhere more exciting, like New York City, so a famous artist living in a regular everyday place like West Seneca made it special and gave me an early pride in my hometown.  The artist was Charles Burchfield.


Burchfield wasn’t from Buffalo (he grew up in Ohio) but moved to the city as a young man and lived in the area until his death in 1967.  He lived within the city of Buffalo for a short while but eventually settled in what was then called Gardenville (Gardenville in now a neighborhood within the larger town of West Seneca).  That Burchfield lived in a place called Gardenville makes sense, seeing as how he’s perhaps most well-known today for his fantastical nature scenes.  But, Burchfield also documented Buffalo’s industrial landscape, capturing the infrastructure around the Buffalo River and Erie Canal.  Railroad architecture, grain elevators and bridges feature prominently in his earlier work, and some of them are still standing.  Some of these structures feature in Burchfield’s painting called Black Iron, so I decided to look further in to them.

On the edge of Red Jacket River Front Park and just south of South Park Avenue, two side-by-side railroad bridges cross the Buffalo River.  It’s the only place where two bridges cross the river at such close proximity to each other.  Could this be the place that Burchfield painted 80 years ago?  I couldn’t really tell from the Google Maps pictures.  All I could really see was that they were drawbridges, and that the one on the left (the west) was locked in an upright position.  Railroad tracks no longer cross that one, and it’s been up for as long as I can remember (even though I’d never seen the bridges up close until I started this story, the raised drawbridge is visible from a distance, and can be seen from the highway when driving in to the city).  In order to know for sure if these bridges were the ones featured in Black Iron, I would have to see them up close.
I traveled to Red Jacket River Front Park on a warm and sunny day a couple of weeks ago and made my way to the bridges, which are located at the easternmost edge of the park.  One thing I noticed right away was how much plant growth separated me from the river.  Burchfield’s painting was done right from the river’s edge, and the view from the park’s path was different.  As I approached the bridges, I could see the operational one clearly, but the raised drawbridge was completely overgrown, obscuring the details of it from my current location.  The one bridge looked right but I couldn’t see enough details on the raised bridge to know if I was in the right place or not.  I was going to have to get closer.
I retraced my steps a little and found a small clearing (not really a path per se) that led right to the water’s edge.  I made my way down there and was happy to see that there was a fairly substantial layer of driftwood and old plants that made a path of sorts along the river.  It was a little squishy in places but was solid enough for me to make my way towards the bridges.  When Burchfield was working on Black Iron, he got stuck in the mud so badly a railway worker had to pull him out.  I didn’t want to suffer the same fate so I proceeded carefully.  As I made my way towards the bridges, I started to get a better look at the raised bridge and started to see signs that I was in the right place.  For starters, the pattern of trusses on the bridge seemed to match what Burchfield had painted.